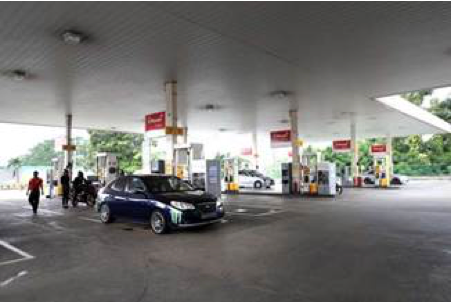 S'pore clamps down on hazardous substance, oil companies have 18 months to meet cap

Oil companies have about 18 months to meet a newly introduced cap on benzene content in petrol, according to the National Environment Agency (NEA).

By July 1 next year, petrol at pumps here cannot contain more than 1 per cent of benzene.

It would be the first time Singapore is clamping down on this hazardous substance, which has been found to cause several deadly diseases, including cancer and anaemia.

"The implementation date takes into account the time needed by oil companies to upgrade their facilities to meet the new limit," an NEA spokesman said.

"At present, the benzene content in petrol is not regulated."

Benzene pre-dated the use of lead to make petrol ignite properly inside engines. It made a comeback when leaded petrol was phased out.

Today, benzene in petrol ranges from about 1 per cent to 5 per cent, with higher-octane fuels containing more of the substance.

Based on average annual petrol consumption here, the NEA cap will remove harmful emissions from as much as 25 million litres of benzene a year.

"It's fantastic news," said Mr Clarence Woo, executive director of the Asian Clean Fuels Association. "We've been working closely with the NEA and even (then Environment and Water Resources Minister) Vivian Balakrishnan on this for the past three to four years.

"We're very happy that Singapore is finally doing something about this."

Mr Woo added that benzene is an aromatic hydrocarbon and a precursor of fine particulate matter - another insidious pollutant.

"Benzene is highly volatile and is a known carcinogen," he said. "With the new limit, there will be reduced exposure, especially among pump attendants, and this should also result in the achievement of higher air quality standards in Singapore."

Mr Ong Eng Tong, an oil consultant who has spent more than 40 years in the industry, said benzene content ranges from 3.5 per cent to 4 per cent for 98-octane fuel, about 2 per cent for the 95-octane grade and less than 1.5 per cent for 92-octane petrol.

Shell claims its petrol grades here all contain less than 3 per cent of benzene, while Caltex said its fuels do not contain more than 5 per cent of the substance.

"The volume of benzene in our petrol is currently well below the 1 per cent cap."

Besides benzene content, the NEA has spelt out other fuel specifications that oil companies have to comply with by July next year. These include a sulphur content of not more than 10 parts per million for petrol, down from 50 today.

The new regulations are timed ahead of the implementation of the Euro 6 emission standard for petrol vehicles from Sept 1, 2017, and for diesel vehicles from Jan 1, 2018.

Euro 6 is currently the most stringent emission standard.

A version of this article appeared in the print edition of The Straits Times on January 14, 2016, with the headline 'Benzene content in petrol to be cut'. Print Edition | Subscribe

Other
Press Release
CNG Vehicles in Final Lap Towards Oblivion